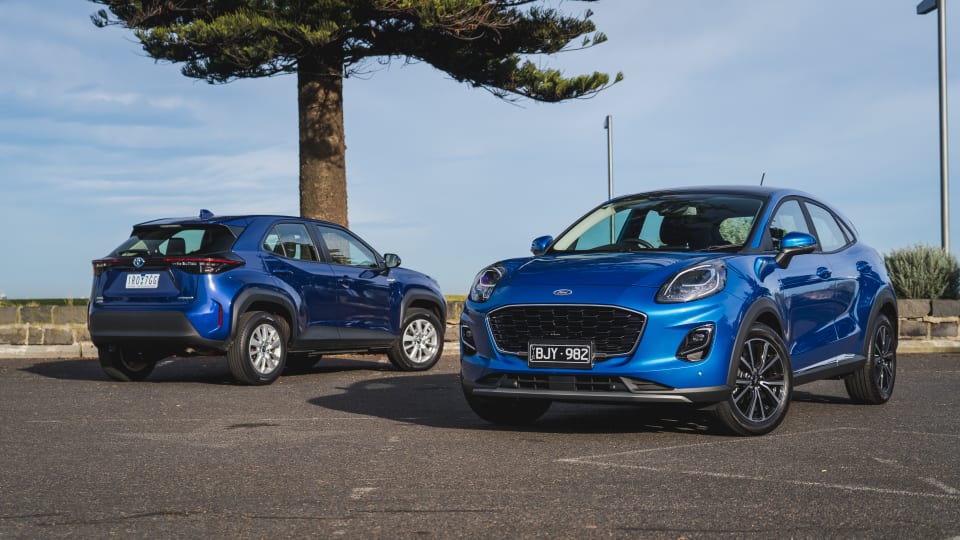 How does the Ford Puma stack up against the latest little hybrid from Australia’s favourite brand?

Australians love SUVs in all shapes and sizes, especially at the smallest end of the market where the Yaris Cross and Ford Puma play. This market is running hot, moving almost three times as many cars in 2021 as it did in 2020. Part of that could be the Covid effect, but the light SUV segment is also well ahead of pre-Covid 2019 figures, so clearly these cars deliver what more Australians want.

We were keen to put two of the newest offerings in this segment together to see how they stack up. So we grabbed the Ford Puma and the Toyota Yaris Cross GX AWD and hit the road. Toyota could only provide us with a slightly more expensive hybrid-powered Yaris Cross, but given that more Aussies are going hybrid, and that the Yaris Cross Hybrid’s price is comparable to the Puma, we think it’s still a fair fight.

The Ford Puma is the smallest SUV that Ford offers. You do feel as if you’re getting a valuable deal with features such as native satellite navigation, wireless phone charging, auto high beam, rain-sensing wipers, LED ambient interior lighting, digital radio, and some nifty LED puddle lamps that display a puma cat.

There are also 17-inch alloy wheels, an 8.0-inch SYNC 3 infotainment system with Apple CarPlay and Android Auto, as well as massage seats – certainly an oddity at this price point.

The entire Puma range is powered by a 92kW/170Nm 1.0-litre, three-cylinder turbocharged petrol engine mated to a seven-speed dual-clutch automatic transmission. Power is sent to the front wheels.

The interior space of the new Ford Puma is a modern, functional space with a suite of neat features and cool tech. Cloth upholstery adorns the seats, which feels robust and built to last the distance (not to mention features a cool design), while the seats themselves are firm and supportive – especially around the shoulders.

Ford’s tried-and-tested SYNC 3 infotainment system features in the Puma. It’s a simple system to become acquainted with, featuring a series of shortcut buttons along the bottom, and its clear and concise mapping is easy to get used to.

For those who prefer it, smartphone mirroring is on offer with both Apple CarPlay and Android Auto services covered.

FordPass is available on the Puma, which allows an owner to check various car systems via a simple mobile phone application. It can tell you where your vehicle is, unlock the car, check the health of the vehicle and display live traffic feeds.

It also features start/stop technology, a radar-based adaptive cruise-control system, and a TFT display within the instrument cluster. While not a fully digital display, the small insert screen still allows the driver to view a digital speedo, control phone functions, change music and fiddle with the car’s functions.

Also of note is a rear-view camera with parking sensors, traffic sign recognition, hill hold and launch assist, as well as an emergency assistant that will automatically phone up emergency services if the vehicle detects a crash.

The Puma’s 92kW/170Nm outputs might not sound too hot on paper, but the 1.0-litre turbocharged three-cylinder engine of the Puma is a punchy and spritely unit. Peak outputs occur at 6000rpm (power) and between 1500–4500rpm (torque), which is perfect for around-town duties.

The Ford Puma wins this comparison, but only just, riding its longer equipment list and driving refinement across the finish line first.